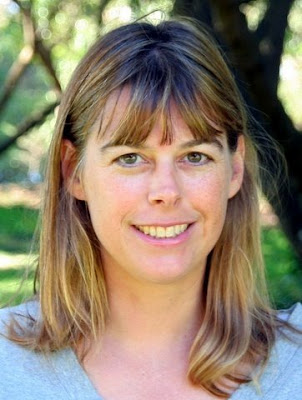 In the heart of Mendocino County, California, there is a gorgeous stand of rare old-growth redwood trees known as Big Tree Grove. One of the redwoods has an amazing tree house. The front side of the tree house is a deck with long benches, the back is a little cabin with a pointed roof. There's a pulley seat to go up and down the redwood. The tree house is fortified with sleeping bags, walnuts, apples, water, peanut butter, bread, cheese, cereal, crackers, powdered milk, jam, and chocolate-chip cookies. Julian Carter-Li, Robin Elder, Danny Lopez, and Ariel Glasser - all ages 11-12 - are camped out in that tree house and they are NOT coming down until San Francisco-based IPX Investment Corp. agrees not to log in Big Tree Grove.

How did Julian, Robin, Danny, and Ariel meet and become friends? How did they find out about IPX's plans for Big Tree Grove? Why do they want to save the grove and how did they get their parents' permission to "tree sit"? Most importantly, are they successful in saving Big Tree Grove? You'll have to read Operation Redwood by S. Terrell French (Amulet Books, 2009) to find out!

S. Terrell French grew up near Washington, D.C. and is a graduate of Harvard University and Berkeley Law. She currently lives with her husband and three children in San Francisco, where she is practicing environmental law.

S. Terrell French is at Into the Wardrobe today to tell us more about herself and about Operation Redwood, which is her debut novel.

Why did you write Operation Redwood? 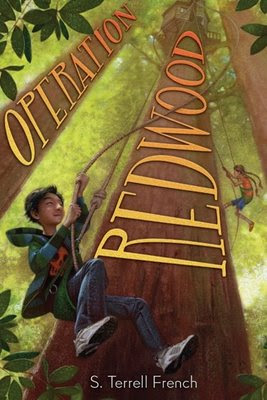 I always loved reading and writing. I'd written a lot in college and then switched paths when I moved to California and began working in environmental law. After my kids were born, I returned to the world of children's books. My first image of the book was of a boy, alone in an office, inadvertently coming across an e-mail from a faraway girl, one that would lead him on an unexpected adventure. I ended up writing the book I wanted to read aloud to my own kids.

WOW. How did you divide your time between being a wife and a mother of three, being an environmental lawyer, and writing Operation Redwood?

When I was writing the first draft of OPERATION REDWOOD, my youngest was only three and my legal work was episodic. I would write during his afternoon naps, while my two older kids were in school, or at night after they were all in bed. I wrote more briefs later, but tried not to schedule work when I was expecting another round of revisions.

What influences and inspirations (both literary and non-literary) did you draw from while writing?

I love the back-to-nature adventures of Jean Craighead George, the contemporary mystery of FROM THE MIXED-UP FILES OF MRS. BASIL E. FRANKWEILER by E. L. Konigsburg, and the lyrical, clear writing of Laura Ingalls Wilder. In real life, I was inspired by the story of the people who risked so much trying to protect the Headwaters Forest -- the last major unprotected stand of old-growth redwoods -- in the 1990s.

What were the challenges and rewards from writing?

It's challenging for me to find time to write now that OPERATION REDWOOD is out and my kids are older. I love the writing process itself. Sometimes I'd be so excited at night after finishing a scene or a chapter of OPERATION REDWOOD, I couldn't sleep. Now that the book is out, I really enjoy meeting with or hearing from kids and other devoted readers like teachers, librarians, and booksellers.

I was excited when I saw that the main character of Operation Redwood, Julian Carter-Li, is Chinese American. Is there a particular reason you made Julian Chinese American?

My husband is Chinese-American and so my own children are "half-Chinese" like Julian. I tried to find books for them with Asian heroes, but found that most were set in Asia or revolved around themes like immigration or trips to Chinatown. I was interested in writing a book, set in the very multicultural city of San Francisco, in which the characters' ethnicity is simply taken for granted and the focus is on other things: friendship, mystery, and adventure.

THANK YOU for writing a middle grade eco-adventure with an Asian hero. :o)

What was the path to publication for Operation Redwood? Was it difficult to find an agent and a publisher?

I was fortunate to find my agent, Kate Schafer Testerman, fairly quickly -- through a friend. Kate really handled everything from there. She submitted OPERATION REDWOOD to Susan Van Metre at Amulet Books. I made some revisions based on Susan's very thoughtful editorial letter, and then Amulet made an offer.

Where were you and what were you doing when you found out that your novel was going to be published? What were your first thoughts and feelings? How did you celebrate the good news?

I knew OPERATION REDWOOD was under consideration and was on pins and needles waiting until my agent e-mailed me. I’m not sure I actually celebrated until the contract was signed (that’s the lawyer in me) and then my husband and I went out to dinner. Because it was my first book, it seemed a little unreal and I had no clear idea of what the future would hold.

What do you want young readers to take away from Operation Redwood?

I wrote the book with my own kids in mind, so I wanted it to have a lot of humor and adventure and plot twists. The book also reflects my own interest in the fascinating history of the California redwoods. I think it’s important for children to realize that the battle over natural resources isn’t just something that occurs in faraway places, like the Amazon, and that taking action can make a difference. 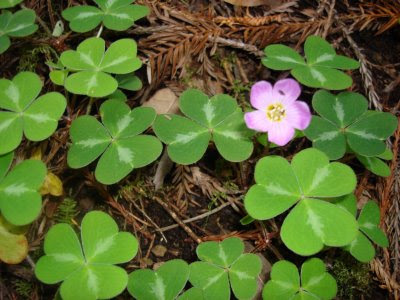 {sorrel, a flower that grows in the redwoods} 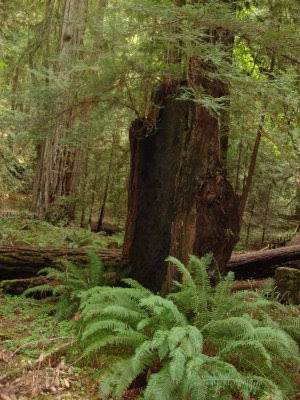 {a redwood snag with a redwood sapling growing out of it}

I better hedge my answer in case my kids ever read this! I would say that if my kids were in the situation of the kids in OPERATION REDWOOD, I might give the kind of permission that Robin's parents give, which is highly conditioned on various promises from the kids. It's a very different scenario from what the (adult) tree-sitters faced during the Headwaters battle.

What are some of your favorite experiences so far from signings, interviews, and other promotional activities for Operation Redwood?

I just spoke at the four-day Children's Writers and Illustrators Conference at Book Passage, a wonderful indie bookstore in the Bay area. I had attended this conference just after I wrote the first page of OPERATION REDWOOD. It seemed impossible at that time that my book would ever be on the shelves at this fabulous bookstore, so it was very gratifying to be back there as “faculty” speaking about OPERATION REDWOOD. I’ve done a number of school visits and I love talking with the kids about the book and about the history of the redwoods. And I just did a book signing a Muir Woods, our closest redwood park, which was very fun. 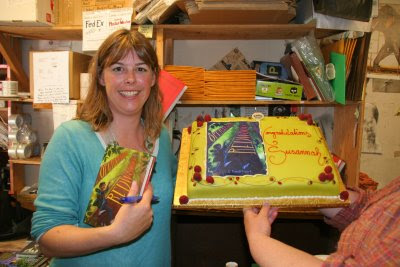 {S. Terrell French at the launch party for Operation Redwood}

Well, I’ve already written the book, so winning awards wouldn’t really change anything (except my ego maybe). So, I’d rather have people reading the book. I just got an e-mail from a boy who said his family read the book under the redwoods during a family trip, and I love the thought of that!

Will you continue to write for children? Are you working on another novel right now?

Thinking a lot and trying to work!

If you were to visit the Philippines, would you a) visit white sand beaches and underground caves, go sailing, go snorkeling and scuba diving, etc.; or b) check out the natural wonders above ground, like the Taal Volcano, the Banaue Rice Terraces, and the Chocolate Hills. Why?

I’m a person who reads guide books obsessively and wants to see everything, especially natural wonders. So I’d probably try to see it all. But my whole family loves the water and snorkeling and going to the beach. The closest we’ve been to the Philippines is Hawaii, which is one of our favorite places. My husband and I used to dive occasionally, but snorkeling gives you a little more freedom and I never really liked all the heavy equipment. We live near the beach in San Francisco, but it’s so cold you really have to wear a wetsuit, so we all appreciate the chance to swim in warmer water. Now you’re making me think we should all go to the Philippines!

Of course you should all go to the Philippines! ;o) Thank you so much for sharing with us today.

To all my blog visitors looking for a summer read, I recommend Operation Redwood. The eco-adventures of Julian, Robin, Danny, and Ariel happen in the summer, and Operation Redwood is an enjoyable read with important messages about the environment and fighting for what you believe in. 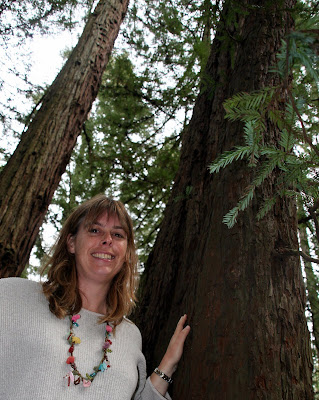 Beth Kephart said…
Hello, Tarie! For some reason, Facebook is not allowing me to post this note, and so please forgive how out of context this seems (though I love this interview, by the way, and I love that book cover.)


Your Facebook note came as such a surprise — my books in a bookstore near you — and I so appreciate you letting me know. Colleen at Chasing Ray is so smart; I feel honored that she's somehow bridged us together.

Tarie Sabido said…
Hi, Beth! Thanks so much for the note. I was really excited when I saw your books in my local bookstore and recognized your name from your comments on Chasing Ray. I've heard great things about your books, and not just from Colleen, so I will be buying them!
11:59 PM

The May 2009 Blog Carnival of Children's Literature

Hello, hello! Welcome to this month's edition of the Carnival of Children's Literature. :D Below you will find links to some of the best May blog posts on children's literature. Enjoy! Excellent book reviews that will make you want to read the book: Becky reviews Where's Tumpty by Polly Dunbar at Young Readers . Susan Stephenson reviews How to Heal a Broken Wing by Bob Graham at The Book Chook . Janelle reviews Before You Were Here, Mi Amor by Samantha Vamos and Santiago Cohen at Brimful Curiosities . Lee Wind reviews 10,000 Dresses by Marcus Ewert and Rex Ray at I'm Here. I'm Queer. What the Hell do I read? . Nancy Arruda reviews Cycle of Rice, Cycle of Life: A Story of Sustainable Farming by Jan Reynolds at Bees Knees Reads . Mary Ann Scheuer reviews A Life in the Wild: George Schaller's Struggle to Save the Last Great Beasts by Pamela S. Turner at Great Kid Books . Z-Dad and his three kids review Mommy Poems by John Micklos, Jr. and Lo