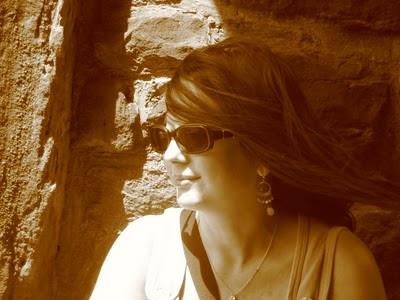 Hello, hello! Welcome, dear readers, to the 2011 Sydney Taylor Book Award Blog Tour! This stop on the tour is dedicated to Sarah Darer Littman and her latest novel Life, After, the Sydney Taylor Honor Award winner in the Teen Readers Category.

I'd like to thank the Association of Jewish Librarians for organizing this blog tour. And of course, big thanks to Sarah Darer Littman for answering my questions and sharing so much with readers. =D

Hi, Sarah. Welcome to Into the Wardrobe! CONGRATULATIONS on winning a 2011 Sydney Taylor Honor Award.

Can you please guide us through your creative process?

I find my process changes according to the needs of each book. But as a general rule, I'll spend time in the beginning doing a huge amount of background reading about the subject I'm tackling. It helps me figure out what specific areas I might want to research more deeply and sometimes I find that research gives me ideas for plot. Then the most important thing for me is character. I'll write what often turns out to be total drivel, but that's okay as long as the drivel helps me find my character's voice. Then I just discard the drivel and start getting serious about the first draft, which I try and get out as fast as I possibly can. I've learned to embrace Anne Lamott's concept of the "shitty first draft." I'm a huge believer. The thing is, writing is really HARD. It's like going to the dentist. It requires lots of coffee and chocolate. So I write as fast as I can so I can get to the part I really enjoy, which is revising. I LOVE revising. I have a hot passionate steamy love affair with revising. I can't wait to get my editorial letter, because I love and respect my editor, Jen Rees, and I know her input will help me to make the book the best it can be. I've also been meeting with an awesome writing group once a month since before I was published. I can brainstorm with them on chapters I'm having problems with and they always critique with honesty, insight, and best of all, humor. Why did you write Life, After? What is the story behind the story? What do you want teen readers to take away from the novel?

I like to think of Life, After as my “phoenix out of the ashes” book – for several reasons. Firstly the concept came about in a convoluted way from another book proposal that was rejected, about a boy with Asperger's Syndrome. I started working on it about five or six years ago but I couldn’t get the voice right, so I put it in a drawer, where it might have stayed if I hadn’t met someone who I met at a mother/daughter book group that had read my first book, Confessions of a Closet Catholic. She asked me if I’d ever considered writing anything for teens about 9/11, because she’d lost her husband on United Flight 93 and she said there wasn’t much written for young people on the subject, which was true at the time. I sent her the synopsis I’d written and she told me I should write the book. My editors at Scholastic were on board, and I found that having met Claudette, and listened to her experiences, I was able to connect with my characters better and I returned to the story with renewed passion. Life, After is dedicated to Claudette, because without her encouragement, the story would probably still be sitting in a drawer.

There were a few relationships in Life, After that I really enjoyed writing - the ones between Dani and her sister, Sarita, between Dani and Jon, and between Dani and Brian Harrison. I loved Sarita as a character - she never failed to crack me up. I have a son with Asperger's Syndrome, and when he was much younger idioms could be a source of considerable confusion (and sometimes amusement) and I've been in a situation where I've seriously - and I mean SERIOUSLY- embarrassed myself in a foreign language by not knowing the idiomatic use of a phrase, so I really enjoyed how Jon and Dani were able to find common ground over that difficulty.

And who wouldn't love writing about Brian Harrison? I mean, seriously! He was the kind of guy I would have loved to date in high school, but unfortunately didn't. I knew I'd done a good job when my teen daughter read the manuscript and sighed, "How come there aren't any Brian Harrisons in MY school?"

The hardest part to write was the first third of the book, which is set in Argentina. I found it hard to write about a place I'd never been, and it showed very clearly in the early drafts. My editors told me that I needed to add more color and visceral details about life in Buenos Aires. I looked into a research trip but as a single mom, it was out of reach for me financially, so I had to use the Internet and my imagination.

What does winning a Sydney Taylor Honor Award for Life, After mean to you?

I can't tell you how incredibly honored I feel to be twice honored by the AJL. When my first book, Confessions of a Closet Catholic won the Sydney Taylor Award for Older Readers in 2006, I was new on the scene and there was a part of me that thought maybe it was a fluke, especially since I followed up my win with a terrible case of second book blues (probably not helped by the fact that I was going through a very lengthy and painful divorce at the time). This time, it is perhaps even more meaningful because I feel like, "Wow, maybe they didn't make a horrible mistake that first time after all!" To be honored this year, when there were so many fantastic books in the teen category is particularly gratifying. And here's what I still can't get over: when I was an aspiring writer, I took a workshop in Writing for Children at Manhattanville College with the late Paula Danziger. One of the books she recommended we read was Two Weeks with the Queen by Morris Gleitzman. I loved that book, and bought Once as soon as it came out. To think that my name is now next to Morris Gleitzman's as a Sydney Taylor Honor Book winner is still hard for me to believe, quite honestly. I have to pinch myself periodically to make sure it's still real.

What's next for you?

My fourth book, Want to Go Private?, about a high school freshman who becomes involved with an Internet predator, is coming out in August 2011 from Scholastic Press. And after tackling so many serious topics I've been longing to write a funny book. I'm currently researching what I hope will be SARAH'S FUNNY YA BOOK. Stay tuned :-)

Liana said…
Great interview. I liked her second book which I believe was purge. Looking forward to wanna go private
2:46 AM

Sheryl said…
Congrats on winning the STBA. I loved Confessions and even managed to convince my then tween age daughter to read it too. She was less than thrilled with the title, but once she started reading it, she wouldn't put it down. I'm looking forward to reading your latest too.
6:33 AM

Barbara Bietz said…
Great intreview. Sarah - thanks for sharing your creative process with us!

Barbara Krasner said…
I began to read Confessions on a flight home from a business trip and inadvertently left in the seat pocket on the plane. I ordered another one so I could finish it! Thanks for persevering and for not leaving your unsold novels under the bed for too long. I look forward to reading your future work. Tarie, thanks for hosting this stop along the Sydney Taylor Book Award blog tour - insightful interview!
9:37 AM

Tarie Sabido said…
Thanks for stopping by, reading, and leaving a comment, everyone! =D
3:54 PM

Anonymous said…
Congratulations to Sarah on her win! I was aware of LIFE, AFTER, and am grateful for the profound insight offered by the author. Thank you Sarah, Tarie. :)
2:59 PM