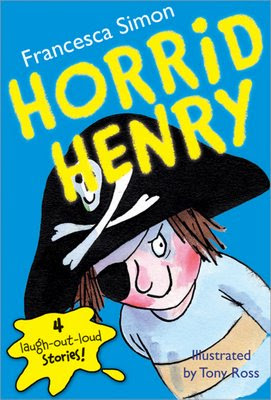 The Horrid Henry books written by Francesca Simon and illustrated by Tony Ross (Sourcebooks Jabberwocky, 2009) are great bedtime stories. Each book holds four short stories, each story being the perfect length to read to your child before bedtime. That is, of course, unless your child begs for more. Which I can definitely imagine happening. :o)

There are times Henry's plans are foiled. But many times he gets his way, and as a reader I find those times the most satisfying. You see, I was a good little girl. (Whaaat? Don't look at me that way. I was! I was practically an angel! *flaps her wings*) The Horrid Henry books allow me to be naughty vicariously. I have a feeling other good little boys and girls will feel the same way. Also, you can't help but root for Henry. At first he shocks with his behavior. Then you realize that Henry isn't really that horrid. He's just a normal boy and he becomes endearing.


[My copies of the Horrid Henry books are from the publisher.]
books children's literature early chapter books reviews

Jules at 7-Imp said…
I've seen Tony Ross' illustrations elsewhere. Like his stuff. Thanks for the tip. I'll have to look into these for my girls!
4:35 AM

Tarie Sabido said…
I love the facial expressions in Tony Ross' illustrations. Just thinking about them makes me want to laugh!

What I like about the Horrid Henry books I have read so far: Sometimes it is nice to be naughty. :o) Wahahahaha.
8:44 PM

Marjorie said…
My two boys LOVE Horrid Henry - and the audio-books are great too. I've nver had a look-in for a bedtime story though: they just swallow them hole. Definitely to be recommneded for (boy) reluctant readers too.
4:15 AM

Tarie Sabido said…
Marjorie, it's just so good when Henry is being horrible! I really can't help rooting for him.
5:48 PM

Harvey said…
I LIKE THE BOOKS LIKE IT HOW TONY ROSE ILLUSTRATES THEM HE DRAWS THEM VERY WELL LIKE HORRID HENRY RUNS AWAY HE REALLY DRAW HIM RUNNING OUT THE BACK DOOR OF KITCHEN DOOR. AND I LIKE ALL YOUR BOOKS THEY ALL MAKE ME LAUGH BECAUSE OF HENRY AND PETER.
9:47 PM

Anonymous said…
I like horrid henry books because they are funny they are funny because of henry and perfect peter if they where not in the book it would not be funny.
9:55 PM