Thoughts on the Twilight Movie 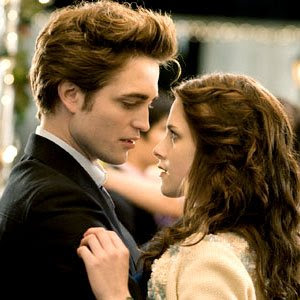 I just couldn't get Twilight out of my head, and I kept listening to Muse's Supermassive Black Hole. So today I watched Twilight for the second time. Now I feel I can share my thoughts on the movie.

The plot development disappointed me. Wait, WHAT plot development? I felt that the plot was not properly developed and that a lot of the characters were not properly fleshed out. There wasn't enough exposition on the Cullens. If you hadn't read the book, you wouldn't know why you should care about the Cullens. And I love the Cullens and wish they had played a bigger role in the movie! There wasn't enough exposition on Laurent, James, and Victoria either. How could audiences know why exactly we should fear them?

I think that people who have not read the book will not appreciate or even understand the story. The development of Edward and Bella's feelings and the choices they made that led to them becoming a couple were presented in a shallow and almost lightning speed way. It almost felt like the movie was simply a montage of scenes from the book. Everything just felt so thin and disjointed and went by way too fast.

But enough about disappointment. I still enjoyed watching the movie. Heck, I liked it enough to watch it twice. Within the same week! Part of why I enjoyed watching the movie was because of the audience reactions. It was fun squealing along with other girls (and some guys too!) while watching the movie. :D We all squealed the first time Emmett and Rosalie were on screen. We all squealed the first time Jasper and Alice were on screen. And of course we all squealed the first time Edward was on screen. What surprised me was the squeals the first time Carlisle was on screen. I think those squeals were louder than the squeals for Edward! We all got giddy then whimpered and positively swooned every time there was a romantic moment between Edward and Bella. Those scenes so perfectly captured the intensity of their desire for each other that they made me (and the rest of the audience too, I bet) grin like an idiot, sigh with happiness/contentment/satisfaction, and HYPERVENTILATE. There was a lot of hyperventilating in the audience, I tell ya. And I am not ashamed to say that I hyperventilate just remembering those scenes from the movie. The onscreen chemistry between Robert Pattinson and Kristen Stewart was GREAT. They are the perfect pair for those roles.

Which brings me to the acting. Robert Pattinson as Edward Cullen was the most glorious part of the movie. He is the perfect Edward Cullen. I think Robert is an amazing actor because he played the role with COMPLETE understanding of Edward's personality, torture, motivation, intentions, and passions. That list could go on and on and on. He really GOT Edward Cullen and was able to effectively communicate that through his facial expressions, body language, tone of voice - through just about every part of the delivery of his performance. Robert Pattinson rocked that role. He is such a good actor. Um, I found Kristen Stewart unremarkable as Bella. But then again, Bella is supposed to be an unremarkable character. So I guess that worked out well. :S

Speaking of unremarkable acting, I was underwhelmed by Cam Gigandet's turn as James. Hmmm, I expected more from Cam since I think he is a good actor. I didn't feel ANYTHING towards him as the main baddie in the movie. Too bad. But I was impressed by the acting from the rest of the cast. Billy Burke as Charlie? WOW. Who would have thought Charlie would stand out in the story? Taylor Lautner as Jacob? Niiice. I really look forward to watching Robert and Taylor duke it out as Edward and Jacob in the next movies. Woot! I could already feel their conflict in the first movie. Good acting! And even though Kris Ivory (Is that really his name?) and Solomon Trimble had the most fleeting of appearances as Embry and Sam, they made an impression on me. Solomon had a grand total of ONE line and he NAILED IT. He NAILED IT, baby. I couldn't be happier with the werewolves' appearances in the movie. :o)

Ok, action. The action was pretty cool. I particularly like the baseball scene. Oh please oh please oh please let me play vampire baseball. With Muse's Supermassive Black Hole playing in the background. Pleeeaaasssseee. The action in the movie was so cool that I wish there had been a lot more. But I did promise to stop talking about disappointment...

To summarize/conclude, the Twilight movie satisfied me as a fan of the Twilight books in the sense that it was a real visual, visceral, and emotional treat for me to see the story come alive on the big screen. In that context I can say that the movie is a good adaptation of the book. But I feel bad that I cannot say the movie is a good movie. It just can't stand up to movie evaluation and criticism on its own. That is a real shame. As a Twilighter, I wanted people who haven't read the book to still be able to know, understand, and enjoy (even love) the story through the movie.

Now it is your turn. What did you think of the Twilight movie? :D
movies reviews

Tarie Sabido said…
Hi, EvilEva. :D I hope the movie makers learn from their mistakes so that New Moon will be a better movie than Twilight!

I have been watching all these interviews of Robert Pattinson and now I want to watch the movie a third time. Sheesh. Hehehe.
6:29 PM

yanka said…
Funny how we seem to have enjoyed it for opposing reasons. :-)

By the way, why do you think the audiences at your screenings reacted that way to Carlisle?
7:10 PM

Tarie Sabido said…
Oooh, why did you enjoy watching the movie? Because of Bella?

Peter Facinelli (spelling?) as Carlisle Cullen is so effing hot. *swoons* And I always did like Carlisle in the books... You should have heard the shouts of the gay guys in the audience for Carlisle. *screams* then "Papa! Papa!" then *more screams* The girls simply screamed, then whimpered. I kid you not. :D
8:47 PM

I wish I had experienced the same audience reactions that you did. That would have been so entertaining!
11:00 PM

vicki said…
Hahaha Tarie. I have to disagree with you. Sorry! Please don't stop buying my treats.
6:57 PM

Tarie Sabido said…
Vicki, sigh. I'm not surprised. I know the movie is not a good movie. I wouldn't appreciate any part of it if I hadn't read and liked the book. If I had read the book but not liked it, I wouldn't have appreciated any part of the movie either.
12:22 AM

vicki said…
Hahahaha! Really? Why is that? I love books! And I did like it. Check out my post on it to see why (in summary anyway). hehehe.
1:29 PM