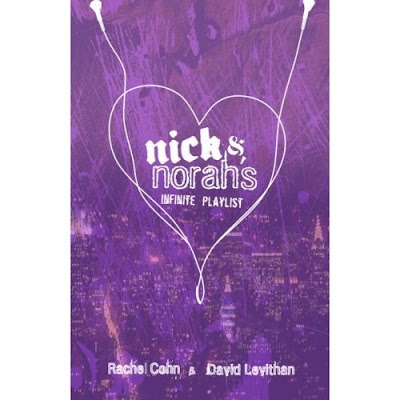 Nick and Norah are really cool and really interesting. Nick is cute and smart and sensitive. He's a talented musician - a straight bassist in a queercore band who composes himself by composing songs. He writes amazing lyrics and puts together amazing playlists and thinks of each night, each moment, as a song. Norah is valedictorian of her high school and has just been accepted into Brown University. She's the daughter of a record company CEO who introduced her to every kind of music while she was growing up, so of course she's a music snob. And Norah may be a flannel-wearing Plain Jane, but she is really fierce. Nick and Norah are both straight-edged (no drinking, no smoking, no drugs - but this doesn't mean they don't cuss or don't have sex) and they are each other's musical soul mate.

Nick & Norah's Infinite Playlist by Rachel Cohn and David Levithan starts with Nick asking Norah in a club if she would be his girlfriend for five minutes. Nick is trying to avoid the Evil Ex Tris who he is still obsessed with and who is walking towards him with a new boy toy. Norah is trying to forget the Evil Ex Tal who messes with her mind and who she continually falls in and out and in and out of love with. She is also trying to avoid her annoying sort of friend Tris who is coming her way. She answers Nick's question by kissing him. That kiss leads to a passionate and confusing night together exploring music, exploring each other, and exploring New York City. Unfortunately (or fortunately?) for Nick and Norah, Tris and Tal are a physical and emotional repeating refrain in their night.

So what did I like about Nick & Norah's Infinite Playlist? I definitely liked Nick and Norah; their passion for music (so much so that I wanted even more of it); their funny, sexy (maybe TOO sexy for my young adult fiction reading tastes *blush*), and exciting night; and their AMAZING chemistry and connection. I also like how the book introduced me to new music and re-awakened my own passion for music.

The chapters of the book alternate between Nick's point of view and Norah's point of view. David Levithan wrote Nick's parts and Rachel Cohn wrote Norah's parts. The structure of this very short novel (less than 200 pages) is very tight and its unity and fluidity really work. What I liked the most was Norah's voice. I found Norah's voice more authentic and more revealing than Nick's. Her thoughts, her questions, her feelings, her doubts and insecurities (about herself, boys, and her relationships with boys) were SO REAL that I found myself relating to her and to them.

What did I not like about Nick and Norah's Infinite Playlist? There were too many parts in Nick's voice that I found too dense or pretentious. Like Nick was trying to be deep and it didn't work for me as a reader or the situation didn't really call for it. There were a couple of parts where I felt that Norah was also trying too hard to be profound.

Still, if someone were to ask me to recommend a cool young adult novel to them, I would definitely say, "Nick & Norah's Infinite Playlist." And I can't wait to watch the movie (which isn't out yet here in the Philippines)!
books reviews young adult fiction

Tin (ni Johann) said…
Johann was just talking about the movie version -- it has a really great soundtrack. ^_^

(Is the book available in National Bookstore?)
5:40 AM

Tarie Sabido said…
Hi, Tin! Yes, Nick & Norah's Infinite Playlist is available in National Bookstore. :D I like the movie soundtrack, too!
11:08 AM

Junelle said…
went to national bookstore this afternoon, asked the sales lady about the book, she says its not available :( hu hu hu
6:43 PM