The Tales of Beedle the Bard by J.K. Rowling 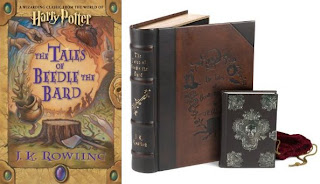 This is part of a quote from J.K. Rowling in the latest edition of Children's Bookshelf, the free weekly newsletter from Publisher's Weekly about children's and young adult literature:

“....I am therefore delighted to announce that... The Tales of Beedle the Bard will now be widely available to all Harry Potter fans....”

The standard edition of the book will feature five fairy tales, an introduction and illustrations by J.K. Rowling, and commentary on each of the tales by Professor Albus Dumbledore.

The Tales of Beedle the Bard will be released December 4. All proceeds will go to Children’s High Level Group, the publisher of the book and the English children’s charity co-founded by Rowling and Emma Nicholson.

I will save up to buy a collector's edition! :o) One hundred US dollars. *gulp*
books children's literature fantasy fiction happy thoughts

Natalie, the Chickenblogger said…
Whoa! That is so awesome!
Cheers for the champions!
9:11 PM

Tarie Sabido said…
Whoops, this is for the post on JP and Brian, right? Hahahahahaha. :D
9:24 PM

Anonymous said…
It still makes me sad that the Harry Potter series is now over (why must good things end?), so this is truly an exciting news for me! I hope J.K. Rowling gives us more of these post-HP stories. I will always support it!

Hmmm. I wonder how I can get a copy of the collector's edition. Must save galleons for it.
12:45 PM

Tarie Sabido said…
Isaac, I am excited about any new (non-Harry Potter) novels or series J.K. Rowling will write!
1:36 PM