on August 01, 2008
Cover art by Greg Horn and interior illustrations by Glenn Fabry 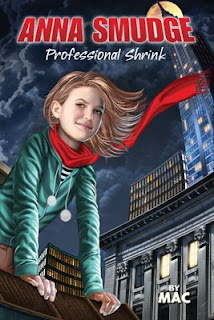 Kids who love comic books and/or mysteries will enjoy Anna Smudge: Professional Shrink, the first book in the Professionals series by MAC from Toasted Coconut Media. (You gotta love a publisher with the name "Toasted Coconut"!)

The Professionals series is about a group of eleven-year-old classmates who are all somehow connected to the criminal mastermind Mr. Who. Mr. Who is a big mystery. Nobody has seen his face and the FBI and CIA say he doesn't exist, yet he runs all the criminal organizations in the world! Each of the kids is a "professional" in his or her own field; and they use their special skills to uncover Mr. Who's identity and reveal his master plan.

Anna Smudge has a lot on her plate: She wishes she could spend more time with her busy parents, hates how adults never really listen to her, and has to deal with a bully at school. She's also the youngest shrink in Manhattan. Anna's free therapy sessions are so successful that everyone from third grade girls to middle-aged men stuck in bad marriages is trying to set an appointment with her. To top it all off, Anna has to figure out a way to save her father from the hitman Donny "the Meatball" Fratelli. Mr. Who is trying to get his shipping company to win a government contract. The shipping company of Anna's father is his greatest competition, so he orders a hit on Anna's father.

Anna Smudge author MAC has said that it was the abundance of fantasy (a genre she loves) in children's literature that made her start working on a mystery series. She wanted to do something different, so she started writing a series set in the real world. This gave me the impression that Anna Smudge is very much grounded in reality, so I was disappointed when I had a hard time "suspending my disbelief" while reading the book. I can accept a larger-than-life hitman. But to have him escape from prison using just a plastic pail on wheels and a mop? I can even accept an eleven-year-old "shrink". But to have literally hordes of New Yorkers readily and eagerly accept her as a therapist and want to set appointments with her? There are many implausible situations in Anna Smudge.

But I soon remembered to put Anna Smudge in its proper context. MAC is a huge comic book fan and the Professionals is influenced by comic book story structure. The cover art and interior illustrations are great in-your-face art by veterans in the comic book industry. When I think of the premise of the entire series and think of Anna Smudge as a sort of novelized comic book, everything makes perfect sense. :o) Anna and her friends are heroes. Only instead of using superpowers like Spider-man or amazing physical skills and technology like Batman, they use their "careers".

Anna Smudge is definitely a fun read overall. And it was fun trying to solve the mystery of Mr. Who's identity. (I guessed wrong. Argh. Either MAC threw readers an exciting curveball at the end of the novel, or I really suck at deciphering clues. :P) For kids looking for a fun, light read that is a good mystery, Anna Smudge: Professional Shrink won't disappoint.

I look forward to the rest of the series. I want to find out more about Mr. Who and his master plan. I want to learn more about the interesting professional kids. I am particularly looking forward to book two, Quenton Cohen: Professional Chef. Children, literature, and food - woohoo!!!

A novel-ized comic book? I must admit the idea is novel to me,(pun not intended)but if it strikes a chord with young adults, why not? :)
4:43 AM

Anonymous said…
Confession - I used to buy coffee from Gloria Jean's. Forgive me? It was only because they had a coffee & coconut concoction.

I haven't read a book like this in a long, long time. More stuff to read after my retirement! Heheh.
10:44 AM

Tarie Sabido said…
Jonette, I think it is LIKE a comic book in novel form. :D

I've been craving a toasted coconut donut ever since I first found out about Toasted Coconut Media...

Yanka, how did that coffee and coconut concoction taste? :o) When you retire, tell me what books you want to borrow from me!
11:49 AM

Anonymous said…
Hi Tarie. I really liked this review. Balanced and fun. It gives me a clear idea of what the book is all about. You're an excellent reviewer for me :)

I like the idea of eleven-year old Professionals in the series. I think each character is something to look forward to. :D
12:36 PM

I also like the idea of eleven-year-old professionals. That's why I will finish the series. :D
1:30 PM