Not for the Faint of Heart: Boy Toy by Barry Lyga 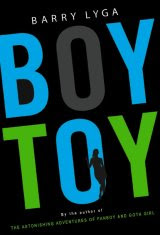 When Joshua Mendel was twelve years old, he was molested by Mrs. Evelyn Sherman, his young and beautiful seventh grade history teacher. Now eighteen and graduating from high school, Josh is still coming to grips with what happened. He has the concerns of a typical teenager: college, grades, sports, girls, friends, family, and money. But overriding them all is the issue of healing from sexual abuse. He physically, emotionally, and mentally suffers from memories of the past. Does anyone truly heal from sexual abuse?

Barry Lyga is a great writer (in fact, I am eager to read his other works) and he tells this disturbing yet fascinating and engrossing story through Josh's present-day narrative, full flashbacks, flickers of memory, and transcripts of Josh's therapy sessions.

Boy Toy is shocking, controversial, explicit, and powerful. In his official website, Lyga says he wrote Boy Toy because he "realized that in almost every teacher sex scandal, there's one person we never hear from - the kid involved. That's because the kids are minors, so they're protected. They don't get their names in the paper or on TV and that's great, but that also means that we never know what their opinions are. So I thought it was time to give a (fictional) voice to those kids." As a result, the novel is a heart wrenching story about the victim's shame and confusion, innocence and guilt, doubts and insights. It is about the victim's frustration and pain because no one understands him and no one ever will. Boy Toy also deeply explores other questions raised by teacher sex scandals: Was parental negligence a factor? What were the motives of the sex offender? How did the teacher manipulate certain situations and abuse authority to take advantage of the student's innocence? Why do many of the victims refuse to testify against their abuser? Isn't the victim "raped" twice - the second time from the police interrogations, time in court, and media coverage? Boy Toy delved into all this and more aspects of sexual abuse.

This is a story that has scarred me for life. But that's a good thing. This story tunnelled its way into my head and heart. Here is a frightening, in-your-face reflection of REALITY that makes you stop and think and feel and learn.
books reviews young adult fiction

Anonymous said…
This is one that I just don't know if I could do it. I've been reading so many war and holocaust books lately that I'm getting all depressed! But you're review has me very intrigued . . . sigh . . . what to do, what to do?
12:49 PM

Tarie Sabido said…
Natasha, I highly recommend Boy Toy. :o) It's a solidly good book! While reading it I missed the innocence of children's literature and my insides squirmed A LOT. But I am glad I read it.
12:58 PM

Your review made me curious about him. ^_^

Tarie Sabido said…
I want to read The Astonishing Adventures of Fanboy and Goth Girl!!!

Read Boy Toy, Tin. You won't regret it. It is upsetting, but isn't that part of what good literature is about? Shaking our assumptions and expectations and shaking us up?
2:47 PM